I got a couple nice cards in the mail yesterday.

First off I don't collect much modern stuff, but if you follow my blog you'll know that I do collect some game used and/or auto cards.  I just like the look of them and so I pick them up now and then.

I also mostly collect these cards of Mark Teixeira.  I liked him when he started with the Rangers and then followed him all the way to the Yankees.  I pick up mostly his game used and autos but also those of other HOFers from my youth in the 80's. 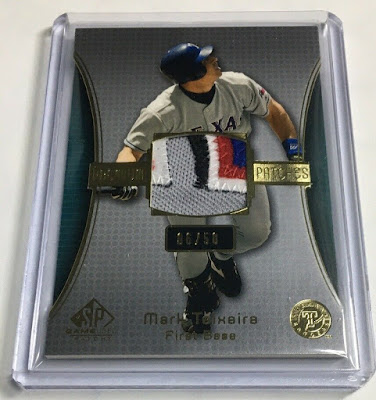 This is a 2004 SP Game Used Patch Premium numbered to 50.  I like the look of the patch on this card and the overall design of the card is nice.  The picture they used of Mark could've been a better choice instead of him looking away but whatever.
Next up is an auto/game used that I am really fond of. 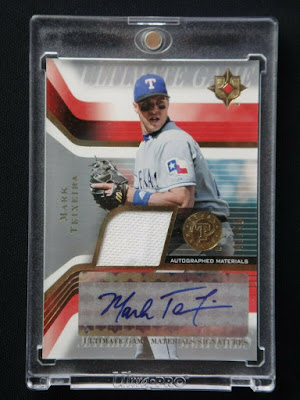 ﻿
﻿
This one is a 2004 UD Ultimate Collection Game Materials Signatures also numbered to 50. I like the colors and design on this one too.  And the signature is nice and clean.  The swatch is just a plain white swatch but I can live with that.

As one of my collecting friends always says, collect what you like.