This card is being sold in the current REA auction and I wanted to highlight it in it's own post and not mix it in with the other cards I just posted about.

There is no ACC designation for the Tango Eggs set as it was not known until a rather large group or around 750 - 800 surfaced in 1991.  The checklist is incomplete but has 20 confirmed (I believe) cards to date.  Prewarcards.com lists 22 cards but includes Joe Tinker and Honus Wagner that have not been confirmed yet.

The Tango Eggs set most closely relates to the E106 American Caramel set with shared cards used in both sets.

This post, however, is about a single Tango Eggs card, not the whole set.  So lets see this Cobb batting pose card. 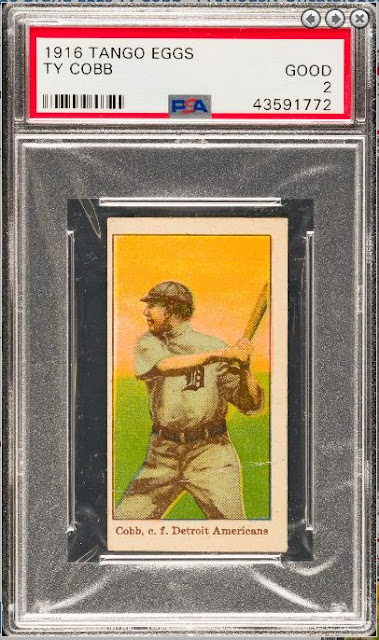 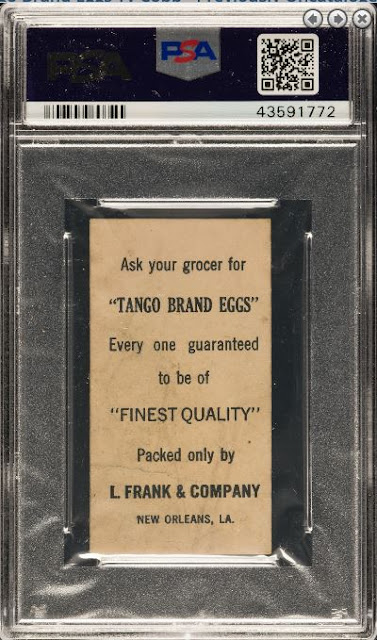 This card is new to the hobby folks.  That's right, it's the only one known to exist.  So it's going to be interesting to see where the hammer falls when the auction closes.
There is another Cobb in the set that has been confirmed, it is the leaning on bat pose that is shared with many other sets including E92, E101 and E102 etc.  That card is in rough shape and I believe it is also the only one known of that pose.
This card sold in the Spring 2017 REA auction for $15,600. Considering the condition of the newly discovered batting pose I can only guess the final price will be closer to $35K.  Like they say, it just takes two heavy hitters to go up against each other to get that price to skyrocket.
So let's keep an eye on this one guys.
Here is the checklist for the set so far borrowed from Prewarcards.com.

This checklist includes Wagner and Tinker, both of whom are believed to exist but have not been fully confirmed.