ID Help - What are these?

I recently picked up these two very interesting cards of Frank Chance and Frank Baker.

As you can see, they are orange and blue and picture pretty bad images of two players.  They are labeled on the bottom front with the player's last name and a number.  And on the back with the players last name. 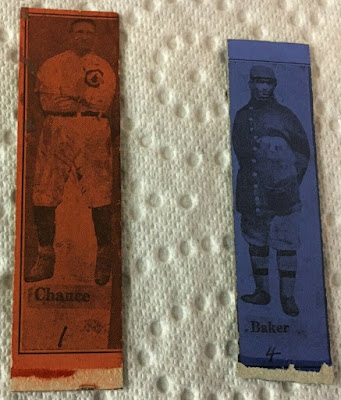 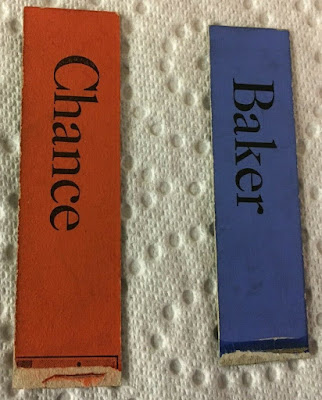 But what are they?  Nobody seems to know exactly for what they were made.  Many think they were part of a board game and were attached to some sort of base that allowed them to be moved around the board.  Let's look at the details.
They are all different sizes and are not cut uniformly as seen below.  The examples below are not mine but represent all the ones I know of that exist other than my two. 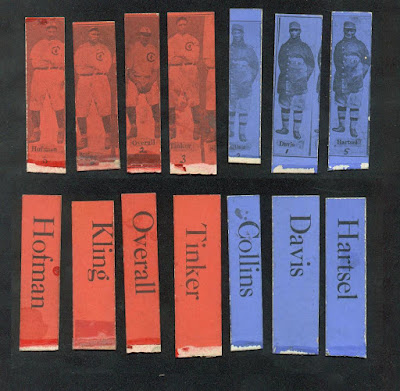 As you can see they are cut rather haphazardly which, to me, shows they were not produced for a commercial board game with any sort of quality control.
They also all have similar paper loss on the bottoms, front and back, where they seems to have been some adhesive brushed on.  This obviously suggests they had something attached to them.
﻿

If you look closely you'll notice that there is another Chance printed on the bottom back of his card.

This would suggest that multiples were meant to be produced.  But why print the front and back on the same side.  Perhaps they were meant to be folded over for some reason.
Perhaps the most interesting trait is the fact that the heads are cut and pasted on the body of a single player and many of the cards show the same body for each player.  The bodies have been identified in photos of the 1910 team photos for the Chicago Cubs and the Philadelphia Athletics.  These two teams faced off in the World's Series that year. 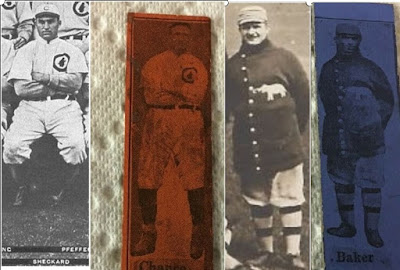 If you look at the image used to Chance, you can see the player (Sheckard) who's upper body was used was actually sitting in the original photo.  So to create the players in the set, the creator had to use Sheckard's upper body, someone else's legs, and each player's head all pasted together.  For the Baker (and other players with the same body) they just pasted each player's head on the body.
Some collectors have shown suspicion that the font on the backs could be of a later date than 1910, however the font has been identified as Recut Caslon which has been in use since at least 1907 so it could've easily have been in popular use during 1910 when I think these cards were produced.
So what do you think?  What are these cards?  When were they produced and why?  I'd love to hear from you.
Enjoy the hobby all...it's a mysterious one.﻿

Looking for something specific?